Mevlana is most celebrated for his poetry, which has invited many passionate responses. Here are some general reflections from the scholar, Annemarie Schimmel, and the Mevlevi shaikh, Şefik Can:

Spring has always been a favourite subject for Persian and Turkish poets, but the exuberance of Rumi’s numerous spring poems can be fully appreciated only by those who have experienced how, in a sudden outburst, the vast plain of Konya is covered with green after a spring thunderstorm…Enchanted by the spring breeze of love, the leaves dance and the flowers praise God in their own silent language. Rumi had heard this praise and taken part in it, translating it into melodious lines; he had seen the loveliness of the heavenly beloved in roses, hyacinths, and running brooks, each of them reflecting it and yet forming a colourful veil for that beauty is too radiant to be seen unveiled.

In most of this great saint’s poems, the reader feels the pain of separation, tears, aching hearts, longing for the Beloved, laments, and pleas, as well as joyful, hopeful, and grateful prayers…You feel that the leaves are falling in autumn, the trees are shaking, and the seasons are coming to an end. A sensitive person can understand what Rumi means through the harmony and spiritual atmosphere of the poems even if he does not know Persian. These poems sometimes make the reader shed tears. Sometimes they enrapture, and sometimes they take one to another world.

[Fundamentals of Rumi’s Thought, Şefik Can]

It is perhaps a reflection of the boundless nature of Mevlana’s poetry that the scholar thinks most of spring, whereas the shaikh thinks most of autumn! Rumi is in tune with all hearts and seasons.

Mevlana’s greatest poetic influences were Attar and Sana’i, and like them he had no interest in literary fame. We get the impression that for him his poetry had value only insofar as it helps us discover our humanity. The real work of art is the human being…

The Mathnawi is in Persian. Mathnawi (Arabic), or Masnavi (Persian), means ‘rhyming couplets’. The title is a reference to its poetic form – each line of verse rhyming with one preceding or following it. All the couplets share the same meter and there are 25,618 of them in six books.

It is useful to hear the Persian if we want to get an idea of its rhyme and cadence. Here is a recitation of its opening verses  posted by Humayun Muhammad:

Moving to the content of the Mathnawi, Iqbal famously said that it is ‘virtually the Qur’an written in Persian’, which should not be understood as saying that it is a translation of the Qur’an into that language, or in some way a competing revelation; rather it is the result of an expansive wisdom that has flowered from the Qur’an. Rumi himself said, ‘I am the slave of the Qur’an as long as I shall live. I am the soil under the feet of the Prophet Muhammad.’ The Mathnawi then is a human creation born out of the self-effacement which the Qur’an proposes to mankind, and which the Prophet Muhammad modelled.

Shaikh Kabir Helminski and his wife Camille (both Mevlevi teachers and translators of Rumi) can bring us closer to understanding the depth and scope of the Mathnawi. They tell us:

The Mathnawi can justifiably be considered the greatest spiritual masterpiece ever written by a human being. Its content includes the full spectrum of life on earth, every kind of human activity: religious, cultural, political, sexual, domestic; every kind of human character from the vulgar to the refined; as well as copious and specific details of the natural world, history and geography. It is also a book that presents the vertical dimension of life — from this mundane world of desire, work, and things, to the most sublime levels of metaphysics and cosmic awareness. It is its completeness that enchants us.

It is said that Mevlana began composing the Mathnawi at the request of his student Husam al-Din Chelebi. He was in his mid-fifties when he began, and the final book was left incomplete on his death in 1273. Quite miraculously, apart from the first 18 couplets which he wrote in his own hand, all of the verses of the Mathnawi were dictated spontaneously – complete with perfect rhyme and meter – to Husam al-Din who copied them down. Şefik Can gives us an idea of how the Mathnawi unfolds:

When Rumi explains a subject, he begins by telling a story in order to clarify his point. Then in the middle of the story, he relates certain wisdom and truths. He produces such peerless couplets that the reader is astonished. These couplets that he recited in a state of ecstasy remind him of another story. So he begins a new story and then finally returns to complete the first story. This way, stories within stories follow each other.

[Fundamentals of Rumi’s Thought, Şefik Can]

Wherever it wanders on its boundless journey, and whatever beautiful forms it evokes, the Mathnawi remains a hymn to a Divine Unity, a unity which, he tells us,  we can reflect and embody  if we develop the selflessness of ‘spiritual poverty’. It is in this way that the Mathnawi defines itself:

Every shop has a different kind of merchandise:
the Mathnawi is the shop for spiritual poverty, my son.
In the shoemaker’s shop there is fine leather:
if you see wood there it is only the mold for a shoe.
The drapers have silk and dun-colored cloth in their shops:
if iron is there, it is only to serve as a yard-stick.
Our Mathnawi is the shop for Unity:
anything you see there other than the One God
is just an idol. 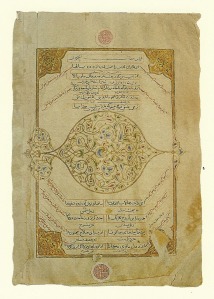 If the Mathnawi is the serene fruition of Mevlana’s wisdom, then the poems of the Divan-e Shams-e Tabrizi – most of which are thought to have been composed before the Mathnawi – offer us a more agitated and ecstatic voice. Perhaps this is because in many of them Mevlana is mourning the loss of his spiritual mentor, Shams, whilst at the same time finding him (and Him) everywhere he looked, within and without. Reading them we begin to understand why the Divan is attributed to Shams.

As he would later with the Mathnawi, Rumi dictated the poems of the Divan in state of rapture. Annemarie Schimmel explains:

Their rhythms often suggest the turning and whirling movement out of which they came. It is said that the hammering of the goldsmiths of Konya inspired him to dance and to recite verses, as did the sound of the watermills in the gardens of Meram. There are probably many more occasions when a mere word or sound struck a responsive chord in him and set him to reciting a new poem. The rhythmical patterns of his lyrics have not yet been analysed in detail, but even at first glance they reveal a predilection for comparatively simple patterns. The meters often chosen have a strong hiatus so that the two hemistiches are divided into four parts, sometimes with internal rhyme, thus resulting in something very similar to Turkish folk songs. In many cases one has the feeling that his poems need to be read according to word stress rather than quantitative meter. Whether they are written in short, light meters or in long, heavy lines, one often feels that they should be sung.

Though there are some written in Turkish and Arabic, almost all the poems are in Persian. There are 3229 ghazals, 1983 quatrains and 44 tarji-bands.

A ghazal, like an ode,  is a verse form traditionally used to praise or contemplate an elevated subject, whether human, natural or divine.  Its length is normally between 7 to 13 couplets. The two lines of the first couplet rhyme with each other (AA) whilst those following rhyme with the first couplet via their second line (BA, CA, DA, etc).

Tarji-bands are like a string of ghazals stitched together by two hemistiches (two half-lines with their own rhyme).   It is conventional for the last couplet of a ghazal or tarji-band to contain the name of the poet, however having effaced himself in his friend (and Allah), Mevlana prefers instead to either mention the name of Shams or to invoke ineffable silence. A favourite ghazal of mine signs off with both. In translation it reads:

Be silent as a game of chess, let the moves speak for themselves.
Didn’t the face of that King of the world, Shams, finish the game?

A quatrain is a much shorter poetic form suited to aphorisms, though they can also capture observations of a numinous natural world, much like a haiku. A collection of them is known as a rubaiyat. They have just four half-lines; usually the first, second and fourth all have the same rhyme (AABA), whilst freedom is allowed in the third (occasionally Mevlana has all four lines rhyming).They also usually have thirteen syllables. Here is an English translation of a particularly beautiful one (being a translation it doesn’t maintain the rhyme and syllable number):

The beloved shines like the sun;
the lover whirls like the planets.
When love’s spring breeze blows,
every moist branch starts dancing.

Outside the poetry, it is the Fihi Ma Fihi which is of major interest. Meaning ‘In it what is in it’ (a ‘wonderfully goofy’ title says Coleman Barks), the Fihi Ma Fihi is a collection of seventy-one lectures transcribed by Mevlana’s followers which elaborate on key Sufi concepts, comment on the Mathnawi, give practical advice to the spiritual wayfarer, and often refer to local people or events significant at the time.   It is an important source of guidance for those following Mevlana’s path.

My knowledge and familiarity with Rumi’s works is slight but growing, and I hope I have not misrepresented them in any way. May a deep reading of his wisdom dispel any misconceptions I may have introduced, and may we all come closer to knowing  the Truth he shares so generously.