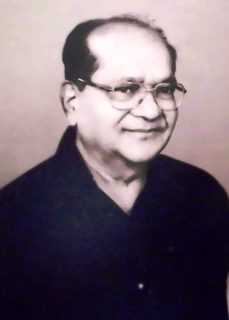 My grandfather, Dr M.G. Gupta was a practitioner of Surat-Shabd-Yoga and was initiated into Radhasoami Faith, Soami Bagh, Agra in 1962 and this Faith has derived heavily from Rumi. There are books in Hindi with stories from Mathnawi Rumi and they form part of Radhasoami literature.

The founding principles of the Radhasoami Faith are the twin principles of the living guru and Saut-i-Sarmadi which are also found in Rumi’s Mathnawi. My grandfather was an ardent follower and practitioner of this faith and this inspired him to take up the translations of Rumi in sheer pursuit of spiritual bliss and elevation.

My grandfather was a great scholar of Persian and Urdu – Persian being one of his subjects in the Intermediate Examination – and also a well known Urdu poet. He was gifted a set of Mathnawi Rumi in Persian by the Department of Culture, Government of India which inspired him to translate Rumi into English.

My grandfather was not a rich man but extremely gifted – a poet, composer of music, a very good player of badminton, could play the harmonium beautifully, and a multi-linguist (he knew Persian, Urdu, Hindi, English and a bit of Arabic and Sanskrit). He was assisted at every step by my father, Rajeev, who is also the publisher of his works. With few means at our disposal it took him nearly fifteen years to translate the six volumes of the Mathnawi and Diwan-i-Hafiz.

My father, incidentally, is currently involved in translating the six volumes of the Mathnawi into Hindi – something that has never been done before.  Three volumes are done and he is on to the fourth volume.

The following is my favourite story by Rumi, translated by my grandfather.

3267-69.    A certain grammarian got into a boat and that self-opinionated fellow turned his face towards the boatman saying, “Have you ever studied grammar?” The boatman replied, “No.” The grammarian remarked, “Half your life has gone waste.” By grief (caused by this caustic comment), the boatman became heart-broken but at that moment he held his peace refraining from retort.

3270-72.    (Then,) the wind hurled the boat into a whirlpool, and the boatman in a loud voice shouted at the grammarian, “Do you know a bit of swimming? Speak up.” He replied, “Don’t expect swimming from me.” He hit back, “O grammarian! The whole of your life is gone waste for this boat is sinking into the conflicting currents of the vortex of water.”

3273-77.    Understand that here (i.e. when you are in extremis) what is required is self-effacement (dying to flesh before death), not grammar; if you are self-effaced, plunge into the sea without fear (bekhatar). The water of the sea keeps the dead (body) on its head (afloat); if the body is alive (i.e. one who does not die to self before death) how could it escape from the (surging waves of the) sea? If you are dead to the traits and attributes of man (man’s basic urges, desires hankerings and yearnings), the sea of (Divine) mysteries will carry you on its hair-divide (i.e. will accord you an exalted rank). But, O you! You have dubbed the creatures (people) as asses, and so you are left high and dry like an ass in the snow. If, in this world, you are the most erudite scholar of the age, now witness the sight of the extinction of this (phenomenal) world!

3280-85.    That pitcher of water (which the Arab carried to the Caliph, i.e. the master of the age) symbolizes the water of different branches of knowledge (accumulated in the narrow pit of our lustful minds) and that Caliph is the Tigris of (lively and perennial) science of God (gnosis). (Imagine that) we are carrying the pitcher full of water (of inane, stale, mundane knowledge – virtually coal) to Tigris (New Castle, i.e. we are carrying coal to New Castle – porter de l’ eau a la riviere: carrying water to the river)! If then we do not regard ourselves as donkeys, donkeys we are! For once, that Arab (in carrying water to river) was deserving of pardon for he was in fact ignorant of and far removed from that Tigris. If he had been aware of Tigris, as we are aware of it, he would have never carried that pitcher from place to place. Nay, had he been acquainted with Tigris he would have dashed the pitcher against a stone. (O gnostic striver!) That narrow and constricted pitcher (of sham knowledge), replete with ignominy and disgrace (naamoos-o-nang), has turned into a screen to hide that sea (the perfect master from our sight); dash it against a stone. (In other words if we become even slightly acquainted with divine mysteries, worldly knowledge will appear to us as stale and unhealthy as the water of the pitcher, and we will unburden ourselves by throwing it away rather than demonstrating it as the Bedouin beggar did.)

*the essence of inflectional morphology, the part of grammar concerned with changes in the form of words by internal modification.