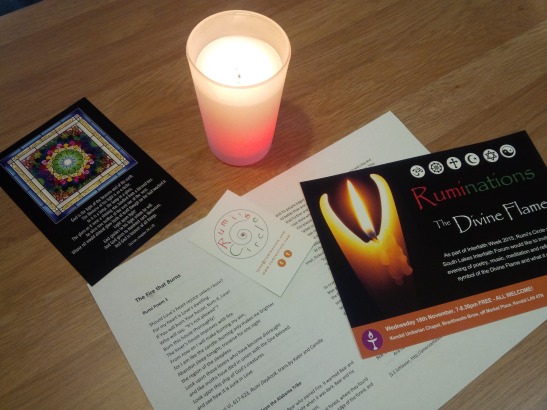 We had a wonderful time last night at Interfaith Rumination on the Divine Flame at Kendal Unitarian Chapel. Thirty beautiful souls braved the stormy, rainy weather and gathered to share music, poetry and heart-felt reflections. We’ve had such an amazing welcome to Kendal and we look forward to many more Rumi’s Circle gatherings!

We’re pleased to share our readings from last night.

Should Love’s heart rejoice unless I burn?
For my heart is Love’s dwelling.
If You will burn Your house, burn it, Love!
Who will say, “It’s not allowed”?
Burn this house thoroughly!
The lover’s house improves with fire.
From now on I will make burning my aim,
for I am like the candle: burning only makes me brighter.
Abandon sleep tonight; traverse for one night
the region of the sleepless.
Look upon these lovers who have become distraught
and like moths have died in union with the One Beloved.
Look upon this ship of God’s creatures
and see how it is sunk in Love.

Feeding the Fire: A Myth from the Alabama Tribe

In the beginning of the world, it was Bear who owned Fire. It warmed Bear and his people on cold nights and gave them light when it was dark. Bear and his people carried Fire with them wherever they went.
One day, Bear and his people came to a great forest, where they found many acorns lying on the forest floor. Bear set Fire at the edge of the forest, and he and his people began eating acorns. The acorns were crunch and crisp and tasted better than any other acorns Bear and his people had ever eaten. They wandered further and further away from Fire, eating the delicious acorns and seeking out more when the acorn supply grew low.
Fire blazed up merrily for awhile, until it had burned nearly all of its wood. It started to smoke and flicker, then it dwindled down and down. Fire was alarmed. It was nearly out.
“Feed me! Feed me!” Fire shouted to Bear. But Bear and his people had wandered deep into the forest, and they did not hear Fire’s cries.
At that moment, Man came walking through the forest and saw the small, flickering Fire.
“Feed me! Feed me!” Fire cried in despair.
“What should I feed you?” Man asked. He had never seen Fire before.
“I eat sticks and logs and wood of all kinds,” Fire explained.
Man picked up a stick and leaned it on the North side of Fire. Fire sent its orange-blue flames flickering up the side of the stick until it started to burn. Man got a second stick and laid it on the West side of the fire. Fire, nourished by the first stick, burned brighter and stretched taller and eagerly claimed the second stick. Man picked up a third stick and laid it on the South side of Fire and laid a fourth stick on the East. By this time, Fire was leaping and dancing in delight, its hunger satisfied.
Man warmed himself by the blazing Fire, enjoying the changed colours and the hissing and snapping sound Fire made as it ate the wood. Man and Fire were very happy together, and Man fed Fire sticks whenever it got hungry.
A long time later, Bear and his people came back to the edge of the forest, looking for Fire. Fire was angry when it saw Bear. It blazed until it was white-hot and so bright that Bear had to shade his eyes with both paws. “I do not even know you!” Fire shouted at Bear. The terrible heat rolling off Fire drove Bear and his people away, so they could not take it and carry it away with them.
And now Fire belongs to Man.

Intelligence is the feast, not bread and roast-meat:
the light of intelligence, my son, is the soul’s food.
Man has no food but the light—
the soul doesn’t obtain nourishment from anything but that.

Little by little cut yourself off from these material foods—
for they are the food of an ass, not that of a free man—
so that you might become capable of absorbing that original food
and become accustomed to eating delicate morsels of light.

Once you eat of the light
you won’t be attached to the bread and oven.

Night cancels the business of day;
inertia recharges the mind.
Then the day cancels the night,
and inertia disappears in the light.
Though we sleep and rest in the dark,
doesn’t the dark contain the water of life?
Be refreshed in the darkness.
Doesn’t a moment of silence
restore beauty to the voice?
Opposites manifest through opposites:
in the black core of the heart
God created the eternal light of love.

[Mathnawi I, 3861-65, Jewels of Remembrance, trans. by Kabir and Camille Helminski]

Strung on gossamer threads
Scattered on flowers and grass
Pure light, myriad colours
Amethyst, emerald, sapphire
Born of the first sun
Burnt by the dayheat
Light and life
Destroyed by the giver
No diamond so intense
Why covet stones?
Why try to capture transient glory?