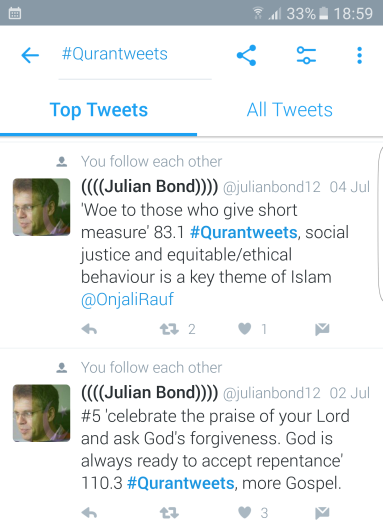 This year was the second year that I read and tweeted the Qur’an, though also a first of sorts in that I started at the beginning, the previous year I had started in the middle. It has long been my practice to read the Qur’an each year during Ramadan, though only recently have I engaged with its social media possibilities. Scripture lends itself particularly well to Twitter, a point not lost on one of my colleagues who, after last year’s #Qurantweets asked if I would be tweeting the Bible. Thanks to him I had reached Nehemiah before taking a break for Ramadan.

Reading the Qur’an is exactly what Christians should be doing. Better to be informed by what Muslims read for themselves than by negative portrayals in the media and misused isolated texts on social media (as a Christian engaging positively with Muslims and sharing this online I receive a lot of these messages). I also had the bonus this year of a Muslim friend, with whom I shared my planned Qur’an-reading commitment,  committing to read the Bible (while presumably reading the Qur’an too) during Ramadan.

Ramadan is meant to be a peaceful time in the Islamic calendar, but in recent years it is anything but. We have grown to expect that it will be a time of significant Islamophobic reportage in the media. Thankfully this was largely absent this year, as the media’s attention seemed to be elsewhere. Despite, or perhaps because of, the association between Ramadan and peace, extremists and terrorists time their atrocities for this month, and sadly there have been a number of them. Reading the Qur’an is to step out of this and also be confronted by some stunning reminders that extremism and terrorism are not Islam.

It is hard to read Surah 2 ‘Al-Baqarah’, the first major chapter of the Qur’an which follows the introductory prayer of Al-Fatihah, and not be struck by how it is opposed to unrest, trouble-making and ‘corruption’. Some people talk about how Daesh are informed by the Qur’an and that they are ‘only’ practising what all Muslims should. Well, it is true that they get a special mention in the Qur’an, on the wrong side of God’s approval, so no doubt it is best to stay away from the Qur’an if one’s intentions are to commit atrocity and terrorism, and it is often reported that this is the case. Repeated reading only serves to highlight how often it promotes forgiveness amongst human beings, rooted in the forgiveness and mercy of God (‘the Most Merciful’). Another strong message throughout is of repentance, as a response to awareness of God and mortality. The Qur’an is not the sort of book (as with Scriptures of many religions) that is going to encourage a large ego. It frequently warns of the danger of ego, no doubt an anathema to the opinionated terrorist attacks of violent extremists.

While reading the Qur’an I was keen to make links with the Bible, not just for the benefit of my Bible-reading Muslim friend, but to show how close these two Books are (though of course they disagree on the significance of Jesus, yet not perhaps so much as some might think). I began by linking the opening verses of Al-Fatihah to corresponding verses in the Bible, though Twitter offers only a small amount of space, not enough to show how close these two versions are. My ‘Christian Fatihah’ appears below:

In the name of our God
the compassionate and gracious God.
Praise be to God Most High
the Lord of heaven and earth,
the Lord is full of compassion and mercy,
he gives us more grace.
He will bring judgment on all humankind.
We will worship the LORD
[and] ask God for help,
to guide our feet into the path of peace.
Blessed are those whose ways are blameless,
not in your anger
and did not go astray.

Nevertheless, one verse that spoke to me particularly in these troubled times was the one I mention in this tweet: ‘This is what an Islamic State looks like “establish prayers, render zakah (charity), enjoin good and forbid evil” 22.41.’ As I have written elsewhere, often on Twitter, these are words that would not look out of place in the Bible. This reinforces my argument that we should be reading each other’s scriptures, encouraging each other and showing (or even proving) that they are being hijacked by those who cloak intolerance and atrocity in religious or scriptural language.

I close with a few more selected verses from the Qur’an that have featured in my #Qurantweets:

The believers are ‘faithful to their trusts and their pledges, give honest testimony.
[70.32,33]

2 comments on “Tweeting the Qur’an”