America of the Heart: Whitman and Rumi 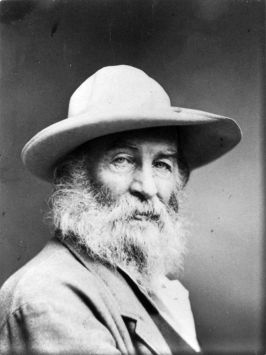 As we enter deeper into the introspection of the winter months and America continues to search its soul in the aftermath of the presidential election, I find myself turning to one of the great American voices: Walt Whitman. What can this champion of democracy say to us at a time when inspiration is so sorely needed?

It’s not just a pressing matter for Americans: many of us in other countries also feel an urgent need to reorient and reflect. For there is a spiritual America extending far beyond the confines of the physical, and it is one in which all humanity has a stake. This America of the Heart is for any who are committed to the expansive and compassionate possibilities within the human being. And I wonder: is it any coincidence that the United States (and the world at large) seems at its furthest from realising these possibilities now, when it is at its most materialistic, soulless, self-blinded, and fearful?

For transcendentalist writers such as Ralph Waldo Emerson (“the Father of American letters”) and Whitman (“the quintessential American poet”), democratic principles were built upon an experience of a Divine Unity pervading all of creation, and they drew much inspiration from Eastern spiritual traditions, including Islam. Emerson wrote with admiration of Muhammad and devoted an essay to the splendours of Persian poetry. As for Whitman, in a poem he wrote towards the end of his life called “A Persian Lesson”, he offered a dignified picture of “the greybeard sufi” who explains to his followers…

Allah is all, all, all – is immanent in every life and object,
May-be at many and many-a-more removes – yet Allah, Allah, Allah is there.[i]

A look at Whitman’s greatest poem, “Song of Myself” gives us a fuller appreciation of his affinity with mystical Islam. For Whitman, we become truly aware of our equality as human beings when we experience an expanded Self. His poem is essentially a hymn to witnessing ourselves and others within God the Great Witness (referred to as ash-Shahid by Muslims), to embracing others within God the All-Embracing (al-Wasi), to becoming one with others within God the One-in-the-Many (al-Wahid). Whitman experiences a sense of unity with all that he sees, and with it comes a tremendous sense of tolerance and freedom, an ecstasy of Being, bursting upon the world with such buoyant confidence in its famous opening lines (from the 1855 edition):

I celebrate myself,
And what I assume you shall assume,
For every atom belonging to me as good belongs to you.[ii]

It is as if Whitman had whole-heartedly accepted this joyful invitation from Rumi, in which the human being, described as a “drop”, is invited to become one with the “Ocean”:

Listen, O drop, give yourself up without regret,
and in exchange gain the Ocean.
Listen, O drop, bestow upon yourself this honor,
and in the arms of the Sea be secure.
Who indeed should be so fortunate?
An Ocean wooing a drop!
In God’s name, in God’s name, sell and buy at once!
Give a drop, and take this Sea full of pearls.[iii]

Whitman’s spirituality is devoid of religiosity: he is not interested in demonising or converting the “other”, but in being an honest witness to the Divine Reality in all its bewildering and beautiful diversity.  His self-love is a love for us all, and he tells us with charming frankness:

I hear and behold God in every object, yet I understand God not in the least,
Nor do I understand who there can be more wonderful than myself.

Why should I wish to see God better than this day?
I see something of God each hour of the twenty-four, and each moment then,
In the faces of men and women I see God, and in my own face in the glass;
I find letters from God dropped in the street, and every one is signed by God’s name,
And I leave them where they are, for I know that others will punctually come forever and ever.

Whitman moves from one person to the next, bearing witness to their essential dignity and beauty; from “the hounded slave” to the “President”. Nobody is to be left out: he is for ‘”old and young”, for “foolish as much as wise”, for “the woman the same as the man”, and his circle grows ever wider until he becomes “Walt Whitman, an American, one of the roughs, a kosmos”, for these people are not separate from him but part of one soul. “One world is aware and by far the largest to me, and that is myself.” Is it possible to hear in these lines an echo from the Quran: And your creation or your resurrection is in no other way than as a single soul?[iv]

Much of the poetry of this great American finds its counterpart in Islam’s most beloved poet, so it is perhaps not surprising that Rumi has been hailed as the most widely read poet in the United States. Rumi expresses the same expansive dismissal of rigid dogmatism. “True religion is the work of bewilderment,” he tells us. We also find a similar sense of God’s immanence within creation, accompanied by a giddy sense of God’s transcendent unknowability:

You are the Spirit of life and we are like hand and foot.
Spirit causes the hand to close and open.
You are intelligence; we are Your voice.
Your intelligence causes this tongue to speak.
You are joy and we are laughter,
for we are the result of the blessing of Your joy.
All our movement is really a continual profession of faith,
bearing witness to Your eternal power,
just as the powerful turning of the millstone professes faith in the river’s existence.
Dust settles upon my head and upon my metaphors,
for You are beyond anything we can ever think or say.
And yet, this servant cannot stop trying to express Your beauty,
in every moment, let my soul be Your carpet.[v]

As long ago as the 13th century, Rumi was challenging sexual and racial inequality, telling us “Woman is a ray of God,” and, “Hindus, Turks, Greeks, and Abyssinians – all have quite the same colour in the grave.”[vi]

But what was the seed for such a beautiful flowering of humanity, so inclusive and so compassionate, and speaking to us with such potency from so many centuries ago?

As long as I have life, I am the slave of the Quran.
I am dust at the door of Muhammad the Chosen.
If anyone makes anything else of my words,
I am disgusted with him and whatever he says.[vii]

So says Rumi. In contrast to today’s powerful elites, I think of Muhammad living a basic life without luxuries, sharing his meals and quarters with slaves.[viii] I think also of his command to the Muslim community to protect peaceful Christians and their places of worship until the end of time[ix], his respect for women that often left his male peers chastened[x], and his faithful obedience to the Quranic injunction to rule via consultation at a time when most kingdoms were ruled by despots[xi]. Is it any wonder that Whitman and Emerson had room for Muhammad and the mystics of Islam in their America of the Heart? This is surely the time to reacquaint ourselves with their broad vision.

Originally published under the same title on patheos.com

[i] “A Persian Lesson” from “Good-bye, My Fancy” included in the tenth edition of Leaves of Grass
[ii] Leaves of Grass, the First (1855) Edition
[iii] Mathnawi IV, 2619-2622, from Jewels of Remembrance, trans. Kabir and Camille Helminski
[iv] Quran, 31:28
[v] Mathnawi V: 3314-3319, from The Rumi Daybook, trans. Kabir and Camille Helminski
[vi] Mathnawi I, 2437 and VI, 4709
[vii] Quatrains: 1331, from The Rumi Daybook, trans. Kabir and Camille Helminski
[viii] “The Prophet of Islam, being a link between the ancient and modern worlds, declared the principle of equality; and though, like every social reformer, he slightly conceded to the social conditions around himself, in retaining the name “slavery,” he quietly took away the whole spirit of the institution.” Muhammad Iqbal, “Islam as an Ethical and Political Ideal”.
[ix] Well documented here: https://covenantsoftheprophet.wordpress.com/
[x] “Woman prevails over the wise man, while the raw and ignorant prevail over her.” A saying of Muhammad.
[xi] Communities shall rule themselves by means of mutual consultation [Quran 42:38].