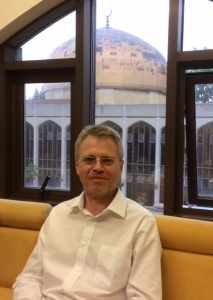 At Rumi’s Circle, we are blessed to be making new friends all the time, and growing this community of lovers. We thought it would be heart-nourishing if these friends were to share with us their spiritual practices and reflections, and hope in time to offer writings from a great number of these beautiful beings.

We start this series of “Reflections from Heart-Friends” with a piece from Julian Bond, former director of the Christian-Muslim Forum and currently the Grants Team Leader for the Methodist Church, on his experience of the Muslim month of fasting, Ramadan, which he observes each year.

The lips of the Master are parched
from calling the Beloved.
The sound of your call resounds
through the horn of your empty belly.

Let nothing be inside of you.
Be empty: give your lips to the lips of the reed.
When like a reed you fill with His breath,
then you’ll taste sweetness.

Sweetness is hidden in the Breath
that fills the reed.
Be like Mary—by that sweet breath
a child grew within her.

I’m not a Muslim but Ramadan is really important to me. As a student and friend of Islam I’ve always tried to find out more and go deeper into Islam, while remaining ‘outside’. I have to put ‘outside’ in quotes as though I am on the outside as a Christian, I don’t feel outside in many ways and I share in ‘inside’ behaviour where I can. Ramadan is a great opportunity to get closer, whoever and wherever you are, but particularly for me.

What about the fasting?

I was talking to someone about my experience of Ramadan this year. I mentioned some of the things that I had been doing. They then responded, surprised, that I hadn’t mentioned fasting. Fasting itself is a known quantity for me, even the long summer fasting and, in one sense, is no big deal, there is no need to mention it. Most Muslims don’t mention it and Jesus himself commanded his followers to keep quiet about it – it’s between you and God. Fasting creates time for God, God willing, time that is not spent eating, cooking, buying food, running to the biscuit tin or making yet another cup of tea. It distracts us from the routine to remind us how often we are distracted normally.

I have written elsewhere of my Ramadan retreat and #Christians4Ramadan and so I will not mention those here. For a change, this Ramadan, I decided to do something different. While fasting on the first day of Ramadan (which I usually do, despite differences of opinion making it a little difficult to know when to start), I went to the mosque for prayers. I thought this would be a good marker of the beginning of the month. And I must admit, for me fasting is easy, but prayer is difficult. Rather than go to London Central Mosque (Regent’s Park), just up the road from my office, I decided to go to a mosque in Kilburn. I know the people in the centre attached to it and have met the imams. Surprisingly, only two people turned up for prayers, the imam and one other in a large prayer space. Even so, the recitations were among the most beautiful I have heard, and then I had to go back to work.

One of my friends took part in #Muslims4Lent, with Ramadan-style zeal. This reflected her aim to achieve the ‘Prophet’s Fast’ during Ramadan. As part of my own preparation for Ramadan I asked her to send me the Prophet’s Fast materials. One of the aspects that struck me was reading and memorising the Qur’an. I resolved to do this, even though I didn’t start until halfway through Ramadan. I was part way through the Qur’an already from a previous read-through so I began where I had left off at Surah 44: We sent it [this Quran] down on a blessed night. At the same time I decided that I would tweet one verse, a modern kind of memorising, from each surah as I went along. This was a great experience, not only was I reading the Qur’an and highlighting warm words but I received many responses, as people retweeted them. It never went viral but one tweet, with a phrase from the Qur’an, and corresponding words from the Bible, was retweeted 16 times, potentially reaching half a million people. Also people started to get in touch with me, by Facebook and Twitter message, saying how great it was that I was tweeting Scripture. If anything made me feel part of Ramadan it was this – reading and tweeting Scripture at a time when it had a higher priority in many other people’s thinking.

But, even so, it wasn’t the practice of sustained Qur’an reading that made the most impact on me this Ramadan. An unexpected chat with a new Muslim friend opened up some other deep experiences, fusing inter faith and Ramadan together. It raised both questions and answers, which I hope to explore more fully another time…